Should You Use Copper Pipes or Plastic Pipes for your Piping System?

The best type of pipes for your home’s piping system is an ongoing debate, with some people advocating for copper and other for plastic. You’ll often hear people trying to convince you to get one type or another, passionately sharing the many benefits that their preferred piping provides.

Yet, more often than not this tends to leave homeowners confused and still wondering what the right choice is. Today, we’ll join in that discussion and, hopefully, will help you to answer the question of whether copper or plastic pipes are right for you.

While we won’t reach a definitive conclusion as to which is better, we will give you enough information about the pros and cons of each to enable you to determine which is best for you.

Why Copper Piping has Long Been a Favorite for Residential Piping 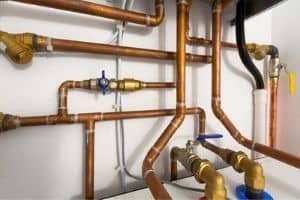 For many years, copper piping has been the preferred material for homeowners. If you’re considering copper piping, there are a few characteristics of copper that help it to stand out.

Plus, it’s a “biostatic atmosphere,” which means it’s hard for bacteria to grow. These long-appreciated characteristics make copper a dependable choice for piping both indoors and outdoors. 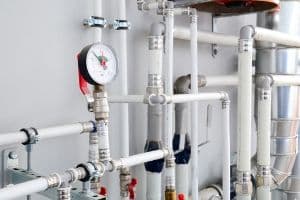 Most new homes have plastic pipes for their piping system. The cross-linked polyethylene (PEX) pipes offer a number of advantages over copper and other materials that have previously been the material of choice.

One clear advantage is that PEX piping is quick and easy to install, making it more affordable. Plus, there are fewer connections and fittings, which not only reduces the complexity of installation but also decreases the risk of leaks.

Further, because of its flexibility, PEX piping is especially ideal for small spaces that are too tight for rigid pipes. Finally, PEX pipes do not corrode or freeze. Given these benefits, PEX piping is common for new homes and is increasingly popular for residential piping systems.

Making the decision more complicated, however, are the unique disadvantages that each type of piping brings. One of the biggest disadvantages of copper piping is that it’s significantly more expensive than plastic piping. And, while it resists corrosion, it can still corrode in certain pH levels.

Further, in cold weather, water can freeze and cause these pipes to burst. The major disadvantage of PEX pipes is that they can’t be used outside. Additionally, they’re not impermeable, which means that they can cause water contamination. Finally, rodents can gnaw and chew these pipes.

While there’s not a clear answer to this ongoing debate, hopefully, this information will help you make a decision about which type of piping system is best for your home. If you need to have your home repiped or if you have any questions about your piping system, call Oliver’s Plumbing & Remodel today at (608) 834-8767.